As I said before, Intuitive Eating is HARD! It is a long, hard process and you can’t expect it to be an easy transition from strict calorie counting to intuitive eating. You have to be open to failure throughout this journey; because every time you fail, is a new chance to learn.

6+ months ago when I set out on this journey, I didn’t expect it to be easy or smooth sailing, but I also didn’t expect what I’m about to talk about to happen…

A few weeks into ‘Intuitive Eating’, I relapsed. I began using MyFitnessPal again to track my calories. I didn’t completely trust myself to eat intuitively and still be hitting/working towards my goals. I’m so use to having complete structure and control over all of my meals, I felt lost without MyFitnessPal close by.

The controlling voice inside my head convinced me I would gain weight, over eat and lose all my hard earned progress because I had stopped tracking and released a bit of control over my diet. I felt like a failure. So I quickly picked up the app again and logged everything I had eaten on the past few days as well as what I planned to eat in the coming days.

Straight away I felt a sense of relief. My anxiety began to subside and I could relax again. But…

A few days later, I had a light bulb moment. I looked back at the data on what I had been eating on the days I was ‘eating intuitively’ and compared them to the days I was now again strictly tracking, and they were almost identical in macros and calorie break downs!

I initially thought, “how on earth could this be?!” I wasn’t tracking so for sure I was over eating and not getting enough protein in? But, the hard evidence was clearly written in front of me and my initial fears of intuitive eating were proven wrong!

It took a little while for this to sink in, but it gave me confidence in myself. And it gave me enough confidence to tell the controlling voice inside my head to “shut the front door!” and just trust yourself! You got this girl! You don’t need MyFitnessPal anymore; you’ve gained so much knowledge from years of calorie counting to know your correct portion sizes. You don’t need a stupid little app to confirm this everyday for you. Just trust yourself and trust your body to know what’s right for you.

I felt so empowered and wanted to give intuitive eating another go. Numbers have controlled my life for too long and I needed to put an end to it. But I knew from my previous attempt, going cold turkey wasn’t the answer. So how did I successfully transition to intuitive eating?

So if you’re going through the same thing I was a couple months back, trying to break free of calorie counting and become an intuitive eater, I really hope these tips help you. Just understand; it’s not going to be perfect, there are going to be days you over eat and days you under eat. But your body can handle them and these will become less and less frequent the longer you stick with it.

Deep down your mind and your body know exactly what is right for you. You just need to muster the courage to trust that, trust yourself and trust the process. Because in the long run, you are going to be so much better for it. ❤

And if you screw up the first time like I did, and the second and the third, pick yourself up and try again. Because there is no such thing as failure, only learning experiences.

Coming up next in My Intuitive Eating Diaries – ‘Trusting your body and the process’. 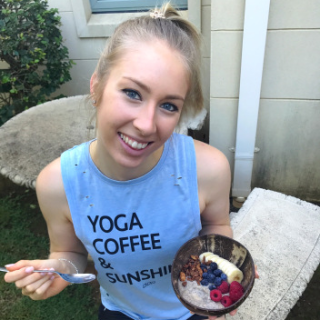 I’m a health-foodie, coffee enthusiast and certified Health & Nutrition Coach! I am passionate about helping people live their happiest and healthiest life by empowering them through education, lifelong sustainable habits, and moving the focus away from quick fixes and diet culture. I believe in a holistic, non-diet approach to health; so say good-bye to any weight & calorie focused diets and let me show you just how you can enjoy your pizza and wine while living the healthy life.